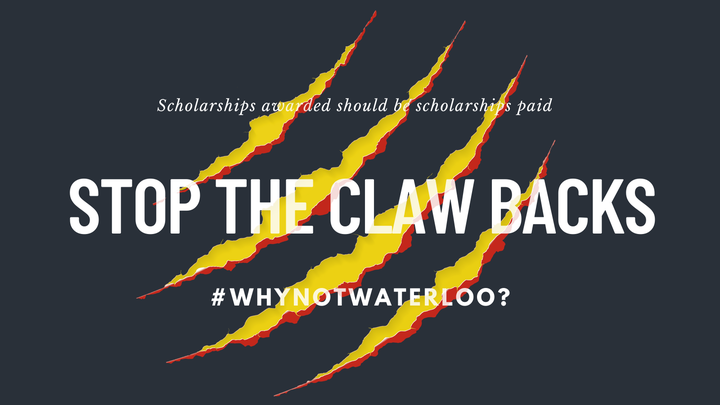 This is the third blog post in the #WhyNotWaterloo? series, inspired by the question “What difference does a union really make?” It explores how working conditions at UW compare to other universities and gives real-life examples of the concrete results unionization has brought. Check out the other posts to learn more.

This spring, Waterloo announced that it would raise the TA pay rate from $33.89 to $45.00 per hour. However, TAs who are graduate student workers will very likely not see any increase in their total take home pay because the University of Waterloo engages in scholarship and grant clawbacks to offset wage increases.

This is something that doesn’t happen where TAs have a union.

Historically, when the TA rate is raised as per cost-of-living increases, the University of Waterloo reduces student scholarships by the same amount. This results in lower take-home pay for students because TA pay is subject to income tax and payroll deductions (EI, CPP), while scholarship pay is not.

Below is an example a PhD student provided to us from an email their department sent them:

This is not only patently unfair, it defeats the entire purpose of increasing wages, whether to pay for a rise in the cost of living, to try to compete with much higher wages at other universities, to offset erosion from inflation, or for some other reason. It shouldn't have to be said, but achieving any of these goals requires your pay raise to actually constitute a raise – not a cut!

Teaching your own course = more work, which should = more pay. Not less.

The University of Waterloo sets higher wage rates for sessional instructors because the expectation is that running an entire class is more hours and harder work than TAing. However, the university then claws back funds from sessional instructors who are also graduate students, so that many actually see lower take-home pay, as more of their total compensation becomes taxable.

UW justifies this by arguing that as a grad you aren't supposed to work more than 10 hours/week (average), no matter if you're TAing or teaching, so it doesn't really matter where/when the funds come from. Plus, they assert that instructing is a great learning experience! But this not only ignores the above-mentioned issues of taxation and real rises in living costs, it also fundamentally ignores lived experiences on the ground.

Of course, many grads feel extremely grateful for the opportunity to hone their instructional skills by teaching their own course. Indeed, it's a privilege to be entrusted with the education of undergraduates, which is at the heart of the university's mandate. However, with great privilege comes great responsibility. Paid jobs in many fields (in)directly provide professional experience; this doesn't negate the real labour involved, nor how UW benefits from it.

Anyone who has instructed a university course knows that it's often nearly impossible to do so properly in only 10hrs/week. In reality, you simply can't stop answering student emails, holding a tutorial, teaching a class, or grading papers when you reach the hours in your contract. Instead, you do what you have to do: work overtime to ensure undergrad students have a good experience, and sacrifice those hours from your own coursework and research time. This can have knock-on effects like increased stress, lower grades, or needing more time to graduate.

It is not ungrateful to expect to be paid fairly for the actual work you do; what is ungrateful is to take advantage of students’ dedication to doing their jobs well to unfairly benefit from hours and hours of unpaid overtime labour they put towards fulfilling the university’s core mandate, only to then tell them they are the ones being demanding if they dare to speak up. Just because this is the norm at UW, doesn't make it OK.

How is this allowed??

This practice is potentially illegal, but the personal and legal costs for students to challenge it are prohibitively high. With a union though, your rights are enshrined in a collective agreement and these practices can be tackled collectively. If the university were to violate your rights or the law, you would get expert advice and help to try to negotiate a fair solution. And if needed, legal fees would be covered by the union, instead of you having to pay thousands of dollars out of pocket.

At other universities, these clawback practices wouldn’t fly, because unlike at Waterloo, they recognize that graduate students are also workers and that the work you do as a TA, RA, or Sessional is separate from your academic research. At unionized universities, offer letters separate out scholarship pay and employment pay, and so the university cannot decrease scholarships in response to pay increases. Their collective agreements also include language that prevents tuition increases from being used to claw back wages, as well as other protections. In short, this simply does not happen at other universities.

In contrast, at Waterloo you're simply given a “minimum guaranteed funding package,” which is then often treated as a maximum funding package when nominal raises are not actually realized. Offer letters have no standard format or requirements for information they must include. Leaving it up to each faculty/department to decide has meant they vary widely and are often vague. When such key details are missing, as a potential graduate student, you can't make a fully informed decision about whether you can afford to accept this offer to attend UW, nor can you properly budget and plan your life once enrolled, because UW deems that they can shuffle your funding around between scholarships and employment pay whenever they want throughout the year.

At Waterloo you have none of the enforceable protections that have been standard at unionized universities for many years, sometimes decades.

The tip of the iceberg

The above are just two examples of the types of clawbacks and unfair pay practices happening across UW that OrganizeUW has heard about from TAs, RAs, and Sessionals. Stay tuned for future articles exploring more examples and how they're similarly problematic. From clawing back scholarships from winners of prestigious external research grants, to suddenly reducing 4th-year international PhD students’ scholarships due to misinterpreting “fine print” in their awards, misclassifying online instructors so they have to teach multiple classes to earn the same as for one in-person class, surreptitiously cutting adjunct professors’ wages after they'd already committed to teach, or suddenly changing graduate research studentships to TAships, thus forcing them to work to “earn” funds they were told they'd receive as a grant – the list is long.

The common thread in these stories is that UW's pay practices often lead to sudden and unexpected funding/pay cuts or delays for TAs, RAs, and Sessionals, causing people immense confusion, stress, and frustration, on top of significant financial strain. Workers tell us how they’ve had to spend hours trying to track down information about out why the cuts are happening, if they should be, and what (if anything) they can do about it (often: very little). They explain how in their search for answers they’re met with a veritable maze of opaque, overlapping, contradictory, or missing workplace standards/policies; insufficient tracking or attention to the details of funding packages; lack of proper communication; no single place to get help; and ultimately an inability or unwillingness by anyone at UW to acknowledge the issue is real, take full responsibility for it happening, commit to finding an appropriate solution, and provide reassurance it won't happen again.

This abdication of responsibility discourages workers from speaking up, disadvantages those with less ability, privilege, or resources to self-advocate, and puts implicit pressure on individuals to think that everyone else is happy, so the problem is unique to them, not something systemic or widespread. It pushes you to give up and accept the status quo, even if it means not receiving money you may be rightfully owed.

Clearly, the status quo is unacceptable. Scholarships awarded should be scholarships paid. At other universities students get to keep their scholarship pay regardless of their work, and it should be this way at Waterloo too. Only by forming a union of you and your co-workers can you enforce your rights, gain long-overdue industry-standard protections you deserve, and hold the university to account now and into the future.

Protect your pay raise from university clawbacks. Ensure that your real take-home pay increases along with the cost of living and is commensurate with the effort and hours you put into your work. Sign your union card today.